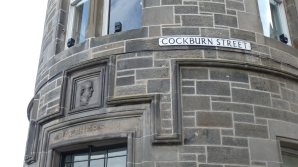 When looking for a hostel in Edinburgh, you might have already come across the name Cockburn Street. Built in the 1850s as part of the early-Victorian remodelling of the city, the serpentine street linked the Royal Mile with Waverley Station. It replaced the tiny and steep passageways like Fleshmarket Close while creating a gentler, wider and more gradient path to the station. Today, parts of the old closes still exist on both sides.

The street is named after Lord Henry Cockburn, a lawyer who was especially interested in the conservation of Edinburgh’s architecture. You can see his face engraved in stone above the entrance of The Royal Edinburgh Military Tattoo Office at the foot of it. 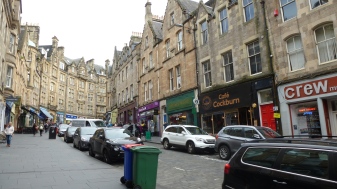 Although a fast food restaurant and some souvenir shops are located in the upper half towards the Royal Mile, there are mainly small specialist shops, cafés, and Still’s, the gallery of photography at 23. So if you’re leaving the Old Town, why not take Cockburn Street and escape the rush of the main roads?

By the way, in March this year, the shooting for “Avengers: Infinity War” took place in Cockburn Street, so have a closer look at the surroundings when watching it!